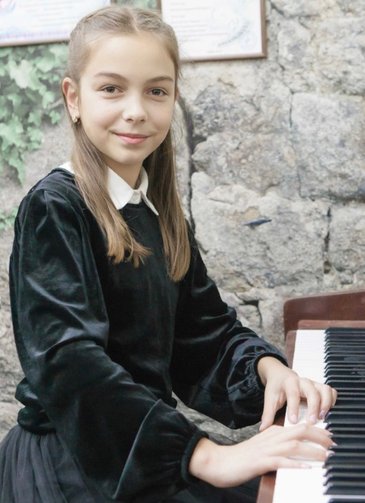 Anastasiia Soloviova, born in 2007, is studying in the class of the Honored Art Worker of Ukraine, Pakhomova Marharyta Oleksandrivna, at the Children's School of Arts named after S.Turchak of Kyiv.

Anastasiia is the winner of the mayor's scholarship in 2015,2016,2017,2018,2019 years. Repeatedly performed on stage at the National Philharmonic of Ukraine, in the Great and Small Halls of the National Music Academy of Ukraine, the Union of Composers of Ukraine and other areas. In May 2018 became the Miracle Child of the Year (All-Ukrainian Prize), Winner of the 1 st prize of the VII International Festival “Chestnut Piano” (2019), and special prize - invitation from Kristina Sandulova to 5th International Stage4Kids Festival as a special guest.