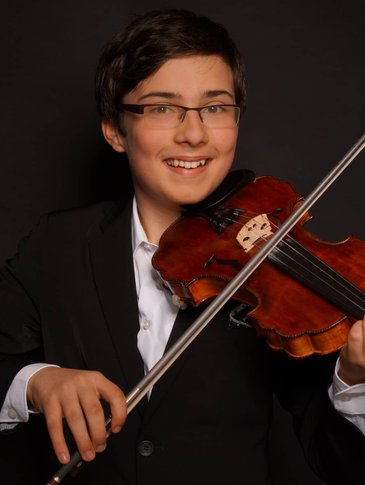 Floris was born in Hamburg on May 16th, 2007. He was given his first violin by his godmother, Dana Anka, primaria of the Nathan Quartett, and started studying with her shortly after his 5th birthday. After relocating to Hessen in July 2019 he now studies with Annette Ziegler at the Emanuel Feuermann Conservatory at Kronberg Academy.

This is Floris' 3rd appearance at the Stage4Kids festival. He will perform "Amstelveldvlucht", which was composed for him by international reknowned film composer Martina Eisenreich.

Floris is a member of 1st violin section of the State Youth Orchestra of Bremen, with whom he performed the German Game Music Awards 2019 and a silent movie project, and with whom he will perform Bruckner's 8th Symphony in 2020. He is also a member of the 1st violin section of Orchestra Gesellschaft der Musikfreunde Bad Soden. Until relocating South he performed with the Elbphilharmonie Family Orchestra and the YouMe! Youth Symphony Orchestra Hamburg. Floris participates in projects with Blankenese Orchestra Project as well as the Orchestra Academy Darmstadt, with whom he will perform Haydn's “Creation” in January 2020.

Floris received several 1st and 2nd prizes, amongst others at the Jugend Musiziert and Bergedorfer Jugendmusikantenwettstreit competitions.