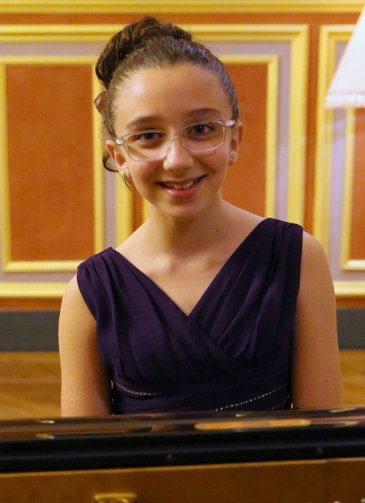 Daphne Delicata was born in Malta on the 8th of July, 2006. She started her piano studies at the age of four under the guidance of her father Marco Delicata, LRSM. Daphne is currently being tutored Elena Nesterenko in Germany. At age 10, Daphne achieved the ARSM Diploma in piano performance with high distinction.

Daphne has won at least 20 awards in various international competitions both in Malta and abroad, the most recent being a distinction in the Jeune Chopin Competition in October 2018. A recent performance in the Malta International Spring Orchestra Festival prompted renowned musician and writer Ateş Orga to review Daphne as “a star in ascendancy.”

Daphne loves to perform in public and has been invited to appear in several national events, including the Rising Stars series of Karl Fiorini's 2018 International Spring Orchestra Festival. In November 2017 she gave her first solo recital at the Palace of the President of Malta. She was also invited to play in the 29th International Mozart Festival in Rovereto, Italy in May 2016, Enfants Prodiges in Rome in April 2017, and Stage4Kids in Hamburg in February 2018. Daphne made her orchestral début this year, performing the Mozart's A major Concerto K414 under the direction of Maestro Lorenzo Passerini (Milan), repeated subsequently with Pavel Gerstein and the Kostroma Symphony Orchestra (Russia).