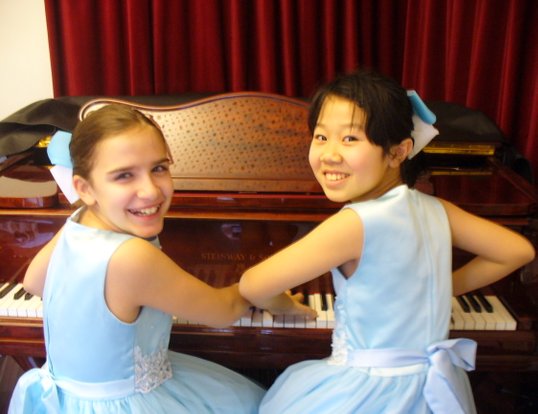 Betty and Kseniya are two young talented pianists from Germany. They are students of Irina Mints at the private Musikschule Minz/ Friedberg, where they met and started as a duo in September 2017. After only two months their duo won first prize at the Willy-Bissing competition in Germany.

Kseniya (born in January 2008 in Germany, to parents of Ukrainian origin) started to play piano at the age of 5 and won numerous prizes at prestigious piano contests in Europe and USA. At the age of 9 she had her debut performing as soloist with orchestra at Carnegie Hall/NY and St. John’s - Westminster/London.

Betty (born in November 2006 in China) has been playing piano for only two years and is making fantastic quick progress in her skills. She already participated in three national piano competitions, where she won first prizes.

Although they have a different pianistic experiences their teacher is sure: They have great musical future!